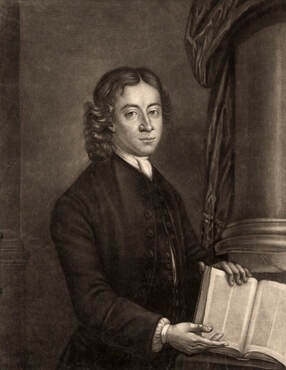 John Cennick (1718-1755) - his finger points to 1 Corinthinas 1.23: 'We preach Christ crucified".
John Cennick was a visionary writer who was born and brought up in Reading 300 years ago.   He lived with great intensity and his short life was filled with dramatic incident. When he died he left behind a large body of bold and vivid poetry, which was known to many thousands across Britain and beyond. Yet today, sadly, he is largely unremembered.

Cennick’s life was transformed by the movement known as the ‘Evangelical Revival’ – a movement which brought spiritual awakening (as well as a good deal of consternation and hostility) to many in eighteenth century Britain. Many of its leading lights – the Wesley brothers, John Newton, George Whitfield  - to name some of the more well-known, were divided over theological issues, but their fundamental purpose was to encourage a religion of the heart and this transcended scholastic divisions. The Wesley brothers were acutely conscious that worship in the Church of England had become for many merely a civic practice, encouraging good behaviour, no doubt, but missing Christianity’s deeper orientation.

For Cennick the decisive events of his life took place in the streets, churches and fields around his native town of Reading. These early events were of such importance to him that he wrote them up in an autobiographical account that, in its despairing self-scrutiny and its matter-of fact but passionate prose, resembles the work of John Bunyan. At one point he even contemplated suicide, although God guarded him in a somewhat unexpected way!

Among the many idle Contrivances I had of escaping, one was to travel by Night to Salisbury Plain; and there sit, or wander about without Food ‘till I shou’d be eased of my tedious Life; having fix’d on Midnight for the Time of my first setting out. I bad Adieu to the World with Tears. As I was eating a Bit of Bread (being alone) I spake thus, I will now eat no more for ever! I shall now trouble the Earth no more; I shall no more see any of my Acquaintance, or Relations, ‘till I meet them in Eternity! I then laid me down as I was, that I might be ready at the Time: But GOD’S Providence so ordered, that I awaked not ‘till late the next Morning; and so was again disappointed.

In the late Summer of 1737 the eighteen-year old began to sense a change in his inner landscape – the clouds began to lift. “I found I was willing upon any Terms to be saved, but was convinc’d I deserved Hell, and so bow’d to the Justice of GOD.” Hardly a dramatic transformation, this tentative sense of acceptance was soon swept away by his recurring sense of guilt. Once again, he decided to run away but, on the 7th of September 1737, “while I was sitting and reflecting thereon, the Saints Bell rang at St. Laurence’s Church for Prayers”. He writes that he felt indifferent about the calling bells, but, in the end –

I went out like some Outcast into a Foreign Land; my Heart was ready to burst. My Soul at the Brink of Hell, above Measure disconsolate and heavy. Had any met me, my Countenance would have betray’d me, as well as low Voice and Tears. When I had enter’d the Church, and fallen on my Knees, I began murmuring (as I did often) because my Cross seemed more heavy than ever was laid on any one beside; and how untroubled all the Children of GOD pass’d to Heaven, and how full of Terror I must go down to Hell! and I was as if the Sword of the LORD was dividing asunder my Joints, and Marrow, my Soul and Spirit; till near the End of the Psalms, when these Words were read; Great are the Troubles of the Righteous, but the LORD delivereth him out of them all! And he that putteth his Trust in God shall not be destitute: I had just room to think, Who can be more destitute than me? When I was overwhelmed with Joy, and I believed there was Mercy. My Heart danced for Joy, and my dying Soul reviv’d! I heard the Voice of JESUS saying, I am thy Salvation. I no more groaned under the weight of Sin. The Fears of Hell was taken away, and being sensible that CHRIST loved me, and died for me, I rejoiced in GOD my SAVIOUR.

Later Cennick became a friend and associate of Wesley – one of the very first Methodist lay-preachers. Later still he worked with the remarkable Count Zinzendorf and the Moravian Brethren – persecuted Protestants fleeing from persecution in Roman Catholic central Europe. Their distinctive devotion, often focussing on the wounded and dying figure of Christ, strongly affected the language and themes of his poetry.

The latter half of his short life was devoted to preaching and church-planting, in both England and Ireland. As with many early Methodist preachers he led an intense and exhausting life, dying at the age of 36 in 1755. His life and thinking is explored more fully in Celestial Anthems, where you can find a selection of his poetry. A small selection of his hymns, including some not included in Celestial Anthems, can be found on this website. The book is small - designed to reflect the feel and appearance of the kind of eighteenth century text which Cennick published - and is illustrated with attractive wood-cut style prints by Ruth Farrelly. 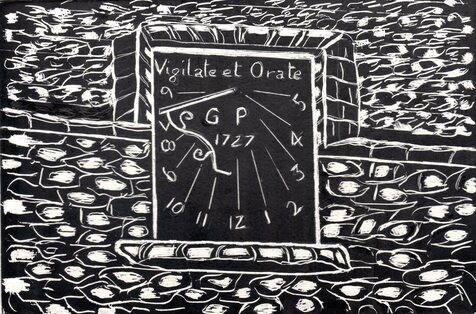 Ruth Farrelly's image of the sundial on St Laurence's church, Reading - Cennick's parish church. The motto reads 'Vigilate et Orate' ('Watch and Pray' - see Matthew 26.41: 'Watch and pray, that ye enter not into temptation: the spirit indeed is willing, but the flesh is weak.'