The Song of the Smugglers 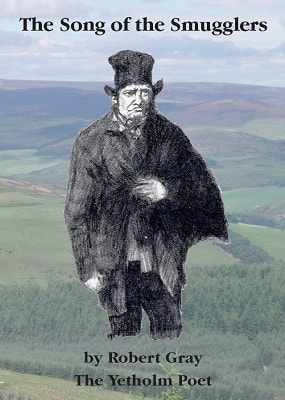 There was canny Will Fa’ of Kirk Yetholm,
An’ he was the King’ o’ the band;
As he was returning from Boomer,
He got a sair slash on the hand.

These verses first appear in print in the mid-nineteenth century. And there are others to be found too, each of them celebrating various rogues who smuggled gin from Boulmer in Northumberland over the border into Scotland. Who, if anyone, wrote this song? And who are the individuals who are commemorated, with names like ‘Blind Wull Balmer’, ‘Jock the Deck’ and ‘Gley’d Tam O’ Lempitlaw’?

This short book collects together the fragments of The Song of the Smugglers that have survived, explains the smuggling background and recovers what can be known about the people involved. Imaginatively illustrated it brings vividly into focus a forgotten but fascinating world and a colourful cast of characters – the ‘Wild Bunch’ of Yetholm and the Borders!

Click here to find out more about Smuggling in the Borders