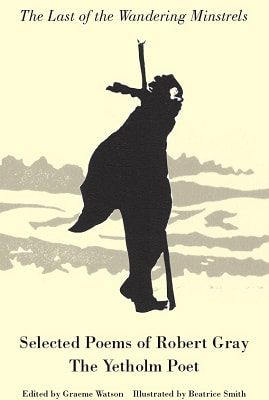 Welcome Robin. What news from Parnassus?
Ou, I dinna ken. I doubt its owre steep a hill for a lyame body like mye to climb …

Robert Gray was born in Yetholm in 1796 and died in Wooler workhouse in 1844. Disabled from birth and unable to earn his daily bread by conventional means, he attempted to establish himself as a man-of-letters, publishing two volumes of verse. However, poverty – and a taste for whisky – meant that he became a vagabond, rambling round north Northumberland and the Scottish Borders earning a pittance by reciting his own poetry to anyone who could be persuaded to listen. With an extended introduction that gathers together all the known information about this ambitious, but sadly thwarted man, The Last of the Wandering Minstrels is the first publication of his poetry since his death over 150 years ago.

The poor man was tall and thin, and wretchedly clad; and his gait and gestures were of a very extraordinary kind … A violent stammering for a while prevented us from understanding what the man had got to say, till at length his words became intelligible, and in the true furor of his profession he exclaimed, ‘I am the poet of Yatholm’.