Robert Gray's shaky signature, from a legal document drawn up when he was forced to sell the family home 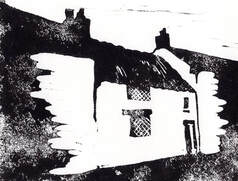 Robert Gray's childhood home.
Robert Gray was baptised in the parish kirk in Yetholm, Roxburghshire, just over the border from England, on the 21st February 1796. His father was a stocking-weaver. The Gray family lived for most of their time in Town Yetholm in the small cottage, now called ‘Huntsman’s Cottage’, in the High Street.

Robert was physically disabled - possibly with cerebral palsy - which meant he found it difficult to walk or to write, although he was intellectually able. His future must have appeared bleak, being neither able to work as a labourer or a craftsman. When he was still a teenager friends in Yetholm rallied round and helped him raise money to publish his poetry. He published books in 1813, 1817 and 1820.
Robert married Agnes Brown at Coldstream on the 19th December 1817, at the age of 21.  This was an ‘irregular marriage’ and took place presumably at the Marriage House on the bridge, which is still standing. The couple had at least one child.

Whatever hopes Robert may have had to support himself through 'intellectual' labour came to nought. The couple seem to have relied on support from the parish - Agnes was regularly given money, but Robert appears increasingly patchily, It is clear that Robert had taken to wandering around the Borders and north Northumberland, reciting his poetry for small cash payments. Whenever he recited his verse he described himself as 'The Yetholm Poet' - indeed, this is the label which is used to decribe him when he periodically turned up for one-off payments from the kirk session.

Extract from the Yetholm heritors records showing a one-off payment to 'Robert Gray The Yetholm Poet' in 1841.
He may have hoped to support his family as a freelance bard, but unfortunately he had a taste for whisky and most of his earnings probably went to pay for moonshine. He was obviously quite a 'character' and several anecdotes have survived which describe him, always in affectionate terms.